So I am just getting a chance to sit down now and update you all on my weekend. It has been a crazy few days, not helped by the fact that I have 2 (!) days of class left and a ton of work to do before then.

Anyways. As you all know, I got to go to the Red Sox/Yankees game on Friday. The last three innings of that game rocked – the rest? Not so much. Perhaps it was all the double plays or the wicked tight strike zone, I don’t know, but the game lacked that buzz typically present for rivalry weekends. Mark Texeira’s first at bat came and went without too much fanfare. He was booed, called sell-out, etc., but he didn’t get much more hatred from the fans than all the other Yankee players. Hopefully that was disappointing for him. Johnny Traitor and Joba the Hun were the biggest targets. 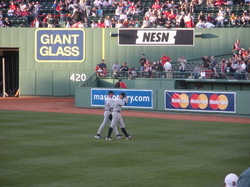 Our seats were great, obviously. Any seat in Fenway Park is automatically a great seat – you’re in Fenway Park. It’s a priviledge to be able to get there. We sat on the right field line about two sections towards home plate from the Pesky Pole and about 12 rows off the field. My dad and I had to keep our heads turned to the left for the entire game, so my neck muscles are still a bit sore, but it’s a nice reminder of the evening.

My favorite pitcher for the Sox, Jon Lester, was pitching against Joba. Jon didn’t pitch his best game – his pitch count got wicked high, wicked fast, but he pitched well enough to allow the Red Sox a chance to win.

Unfortunately, the Sox decided on Friday that they would have liked to ground into 27 double plays if it had been possible. Every rally through the first 8 innings was killed by a double play. The Sox had gathered a couple runs here and there – one of which was the result of Jacoby scoring from second on a passed ball – but they found themselves down 4-2 in the bottom of the ninth.

I really didn’t think they would be able to come back. There were no signs of offensive life on the team, and Mariano Rivera was in with a 0.00 ERA. Yes, the Red Sox have had their way with Rivera since 2004, but Friday night didn’t seem like the night it would happen again. I was ready to be satisfied with the chance to even go to a Red Sox/Yankees game and make the best out of the loss.

Boy was I wrong.

Jason Bay came up with two outs in the ninth, Kevin Youkilis on base, and Mariano throwing decently well. He was our last hope, and he didn’t disappoint. On the second pitch of the at-bat, Bay knocked a 2-run home runs into centerfield, ruining Rivera’s perfect ERA and causing his first blown save of the year. It was sweet.

Papelbon came in for the tenth, and while he continued with the theme of the night and threw a ridiculous amount of balls, he was able to retire the side damage free and give the Sox another chance to win.

The Yankeees brought in Dimaso Marte for the bottom of the tenth. His ERA was somewhere around 18.63, so I was pretty sure the game was over at the point. Instead, Marte threw a 1-2-3 inning, bringing up Ramon Ramirez for the top of the 11th. Ramirez again pitched well (he’s been a nice pick up for the Sox), so in the middle of the 11th I turned to my father and said, “If the Red Sox want to win this game, they’ll have to win it now.”

Marte stayed in for the 11th, and he retired David Ortiz. I was shocked that this guy had gone through some of our best hitters with his horrible ERA and gotten through scar free. That was about to end.

Kevin Youkilis came up to bat and sat on the first four pitches. The count was even at 2-2 when Marte threw his final pitch of the night. Youk swung and drove that ball to Landsdowne street, sending us all home quite happy.

I haven’t seen a walk-off win live since I went to Game 5 of the 2004 ALCS. No baseball game will ever be able to top that – it was an amazing experience not only because we won, but because the atmosphere at Fenway that night was incredible. However, I was pretty psyched to get another chance to witness a walk-off, especially against Mariano Rivera and the Yankees.

The other huge event of my weekend came Saturday night, after the Red Sox and Yankees finished their ridiculously long, messy, 16-11 affair. Around 7 PM, Warren Towers apparently had an electrical fire.

Warren Towers is the biggest dorm in the United States. It’s the tri-tower building that lines Comm Ave in the shadow of Fenway Park. The three towers house 1800 students, most of whom are freshmen, and is always buzzing. The lights are constantly on, elevators constantly running, people constantly yelling and running around. On Saturday nights, the place is buzzing with the excitement of students who are getting ready to go out for the third and last night of the weekend.

Apparently, the transformer that powers Warren blew up sometime around the end of dinner, which goes from 4:30 – 8 PM. This caused the entire building to lose power and also shut off the vents in the dining hall, which meant that all the smoke from the grills had nowhere to go. The place immediately filled with smoke and all of the fire alarms started going off.

I don’t live in Warren, but I was getting texts and seeing facebook posts from friends saying

that something was going on down there. As journalism majors, my friends and I were intrigued and wanted to see what was going on, so we headed down to Warren to meet up with our displaced friends and check out the action.

Warren was black. The only light in the buildings was the reflections of lights from other buildings. People were trapped in the elevators from when the power went out, so firemen were running in and out of the building with hatchets. Comm Ave was shut down from BU Central down past the COM building because it was filled with firetrucks trying to fix the mess.

My friends and I hung out with our Warren friends at the BU beach while we waited for word on whether or not they would be able to sleep there that night. It was actually pretty cool, because it was a nice, warm night and tons of kids were just hanging out at Marsh Plaza and the BU beach with friends. Most were sober for once, since a lot of the alcohol was stuck in Warren. People played frisbee, rock soccer, wiffleball or just hung out and talked while watching the lights of the firetrucks and police cars take care of business. I’m kind of glad Warren Towers blew up – it provided for a fun evening. Best of all, nobody was hurt in the process.

Today, the Red Sox are coming off their 11th straight victory. The team is looking so much better now than it did coming into the homestand: they’ve figured out their individual roles, the timing is getting better, they’re producing runs in both blow-out games and pitchers duels – things are going well right now. Obviously, this win streak won’t last forever. The
Sox HAVE to lose at some point, but at least for now we aren’t worrying about playing at least .500 baseball.

Finally, I want to give a shout out to Jacoby Ellsbury. I have NEVER seen a straight-out steal of home ever in my life. I know he did it on purpose in honor of my birthday (which is today). Thanks Jacoby! That was awesome!

The 79th All-Star Game was that of legend, both literally and figuratively. If that game can’t showcase the best baseball has to offer, I don’t know what can. The pitching was awe-inspiring, the offense was fighting, the defense was Ugglay at times and amazing at others, the stadium was gorgeous, and the ceremonies were spectacular.

Then there were the people; the media who made up a story in order to widen their audience, the citizens who displayed the worst New York has to offer, and the fans who succumbed to a version of mob-mentality that made them seem idiotic.

People claim that what happened to Jonathan Papelbon these last two days should be expected, that as part of a rivalry, a player often finds himself threatened by people who look to tabloids instead of facts for information and should simply let all of it roll off his shoulders. On a small scale, the aforementioned may be passably acceptable, however, when a pregnant woman is taunted and threatened, a point is reached where those threats are simply immature and disgraceful.

Papelbon never said that he should close instead of Rivera. What he did say, as reported by Mark Feinsand of the New York Daily News (the paper that dubbed Papelbon “Papelbum”0 was, “If I was managing the team, I would close. I’m not managing the team, so it don’t matter. We’ve both (Rivera and himself) earned that right; us, by winning the World Series and having the opportunity of having our manager there and our team being represented, and Mariano by what he’s done for this role, we’re in Yankee Stadium and blah, blah, blah. It’s not that easy. Everybody thinks it’s a cut and dry answer, but it’s not.”

Papelbon later reinforced his comments by telling The Boston Globe that it is in his competitive nature to want to close the game. Add to the equation that Papelbon wasn’t the only one who expressed his desire to close and you get some irresponsible journalism. Francisco Rodriguez of the Los Angeles Angels also said that he would like to close, calling on the masses to judge by the numbers. Rodriguez leads the major leagues with 35 saves in contrast to Rivera’s 23 and Papelbon’s 28. The New York media, however, in the nature of rivalry, drew no attention to Rodriguez’s comments, which were enclosed by parenthesis as a type of side-note to the article, but rather targeted Papelbon.

Instead of an apology, the New York Daily News continued to fall short of the bar when columnist John Harper labeled Papelbon, “just cocky enough to be a true villain” and claimed that the All-Star Game was “something of a tribute to Rivera, the best closer ever,” and wrote that Papelbon should have just simply conceded to Rivera. I must have missed the memo that the All-Star Game was all about Rivera instead of Yankee Stadium, and the whole purpose of the event was to show for a half of an inning what majesty is embodied by: the legendary Mariano “Mo” Rivera.

If somehow the world of which John Harper speaks actually exists, then I suppose it was permissible of Yankee fans to threaten a pregnant woman who did nothing more than marry Jonathan Papelbon. Heck, I know I spend most of my free time watching pregnant women and yelling obscenities at them during a time in which they celebrate the achievements of their spouses.

The behavior of New Yorkers during festivities caused Papelbon to claim, “I wish I hadn’t taken [my wife].” Mission accomplished New York, although I am not sure what good New Yorkers accomplished by their display.

During a time when the nation’s most passionate baseball fans were celebrating the end of an era in baseball while watching the best players at their best, the New York fans and media were quite simply at their worst. Their behavior these past few days has been nothing short of a disgrace to a great city and a great franchise, and will forever mar the otherwise perfect tribute to the greatest sport there ever was.